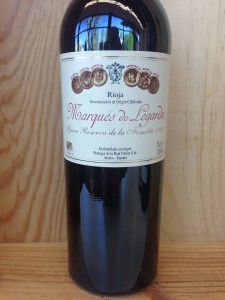 Producer Notes “Bodegas de la Real Divisa are some of the oldest wineries in both La Rioja and Europe, belonging to a family legacy, which boasts the noble, family name of Marqués of Legarda.  Bodegas de la Real Divisa also produce highly expressive wines, created from the older vines: Draco and Marques de Legarda Reserva de la Familia. These wines are only elaborated during year, when the grapes are of optimum quality, as much so in the plant’s general health as the grapes’ organoleptic characteristics.  [The Reserva de la Familia is produced from] grapes originating exclusively from the bodega’s own vineyards. … Read the rest