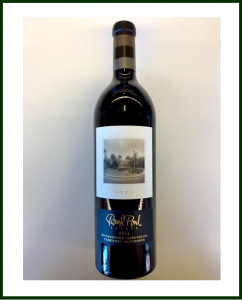 In Napa, like in Bordeaux, some areas produce finer wines than others. The Rutherford region, for example, represents one of Napa’s best sites, something like a St Julien. Round Pond Estate, now in its second generation of family ownership and operation, hails from Rutherford. The MacDonnell family grows first-rate wine grapes, and trusts these to their gifted winemaker Muiris Griffin. Having studied in Bordeaux, Griffin soon collaborated with Opus One before working with Paul Draper at Ridge. None other than Robert Parker loves Round Pond wines, while Antonio Galloni has this to say: “Round Pond remains one of the true under the radar jewels of Napa Valley.” We’re putting their exquisite wines on your radar, so you can taste what Parker and Galloni are talking about. – Daniel

Robert Parker 92 Points “The 2013 Cabernet Sauvignon Rutherford, a blend of 77% Cabernet Sauvignon, 19% Petit Verdot and 4% Malbec, is a beauty. It’s also realistically priced by Napa standards. The wine reveals toasty oak, blackberry and cassis fruit, beautiful texture, purity and length. This is a big-time winner and should drink well for 12-15 years.”

Antonio Galloni 92 Points “Round Pond’s 2013 Cabernet Sauvignon Estate is fabulous. Aromatic, pliant and expressive, the 2013 is incredibly nuanced for such a young wine. Sweet red plum, wild flowers, mint and cinnamon meld together in a medium-bodied, gracious Cabernet that will drink well with minimal cellaring.”

Want a Round Pond for everyday drinking? Here it is: