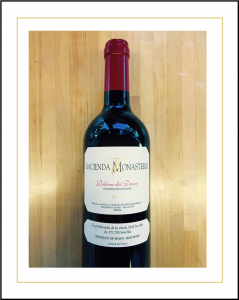 Just outside the town of Pesquera, in Spain’s Duero Valley, Hacienda Monasterio has been producing sumptuous reds since 1992. Limestone soil and organic viticulture give the south-facing vineyard just the right amount of delicacy to match the heat and sunlight. Tinto Fino (Tempranillo) produces the majority of the estate’s grapes, but Cabernet Sauvignon, Merlot, and Malbec also find their way into the blends. None other than Peter Sisseck, founder/winemaker at Pingus, started this project and continues to serve as head enologist. His work supports the popular, New World style of Spanish wine. – Daniel

Wine Advocate 94 Points “The current vintage for the crianza is 2012. The 2012 Crianza, from a dry vintage, resulted much fresher than expected, fresher than 2009 and 2011 in fact. The vines are dry-farmed and were planted some 22 years ago, and you might say they have matured by now. The approximate mixture of grapes in their vineyards is mostly Tempranillo with some 10% Cabernet Sauvignon, 8% Merlot and 2% Malbec, and it’s more or less the blend in this wine. The Cabernet works well, providing finesse and some acidity to the Tempranillo….The wine matured in 20% new French oak barrels for some 20 months. There are no traces of the barriques and the nose took me to the Riberas of yesteryear, with some subtle rusticity; it’s ripe without excess and there’s good balance between fruit, spices and perhaps something earthy. The palate is extremely balanced, medium-bodied with very fine tannins, tasty, approachable and long. This could very well be the best crianza ever produced at Monasterio. This has to be one of the bargains of the vintage in Ribera, given the quality it delivers.”