Every now and then, we taste wines from a producer that’s clearly Going Places—like the star student in a high school class, it’s painfully obvious that some domaines are driven in a fundamentally different way from their peers.  The current incarnation of Clos de la Chapelle is clearly one of those estates—the praise keeps coming and it won’t be long until these are thought of (and priced with) wines like D’Angerville, Lafon and Lafarge as some of the top bottlings in Volnay.

That drive comes down to one person, … Read the rest 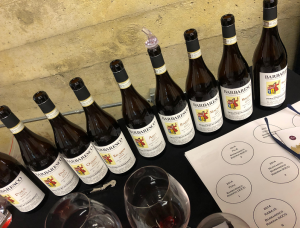 Produttori del Barbaresco is revered for producing classically-styled Barbaresco and Riservas of uncompromising quality and transparency. It’s a miracle that these wines are still affordable and available, especially when compared to the skyrocketing prices of Barolo. You’d be hard-pressed to find such consistent quality and complexity out of such an extensive range of single-vineyard Nebbiolos anywhere else. We are pleased to present the 2014 Crus – a range already receiving rave reviews from Italian expert Antonio Galloni.

Consider yourself warned: These are HIGHLY limited in comparison to prior vintages (Rabaja in all formats is already sold out). Shop the complete list on our webstore now by clicking here or view them all below:… Read the rest

94 Point Cabernet from Off the Beaten Path

The Best Wines in Priorat?

Rosé of the Day!

All good things must come to an end.  Unfortunately in this case we mean both the end of the Scott Paul winery and also the deals that have been coming as they liquidate their remaining inventory.  We’ve learned that they’ll be closing up shop for good at the end of the month, so we’ve stocked up with as much of their wines as we could—these deals require quantity purchases (both for you and us).

Marcus Goodfellow’s labels have been mainstays at the shop for some time now.  When the Wine Advocate’s review for the 2014 Richard’s Cuvee Chardonnay came out, we can’t say we were particularly surprised.  As you’d expect the 750’s of the Richard’s sold out in a flash, but it turns out that the winery had a number of cases of half bottles that no one has pounced on.  Lucky for you, we’ve scooped up the last available from the winery, so once these are gone, they’re gone.  In the meantime, this in-its-prime Chardonnay will make a beautiful wine to buy in bulk—the half bottles just make it that much more convenient.

Some Tuscan Sun to Chase Away Your Winter Blues

Top Gevery-Chambertin in the January Sale

Serafin is one of the best names in Gevrey-Chambertin that’s not talked about enough—and we’re trying to correct that problem.  Christian Serafin is one of the best producers in Gevrey, making powerful, intense wines, at prices that are far lower than most of his peers in the village.  We’re making those already favorable prices even lower for you—these wines are now in our January Sale, including some hard to find back vintages like 2012 and 2011.
… Read the rest