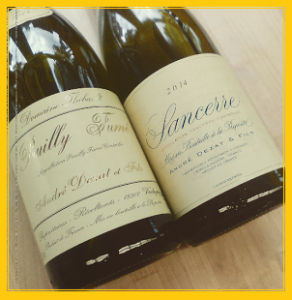 The 2014 vintage stands among the Loire Valley’s finest in ten or fifteen years. Perhaps it’s an overstatement, but a vigneron in the Valley was quoted by saying “you’d need to work hard to make a bad wine this year…” But truly – with no embellishment –  it was a fantastic year for Loire. Dezat’s selections are by no means an exception, priced quite fairly and ready to contend against the summer months!

The Dezat family name is basically sewn into the historical fabric of Sancerre, as municipal records refer to them as early as 1550. In 1948, André Dezat took over his family’s vineyard holdings and took an active role in promoting the domaine as well as Sancerre-at-large. His sons Louis and Simon joined him in the 1970’s, and in the ensuing years have expanded to now include Sancerre, Menetou Salon, and Pouilly Fume.