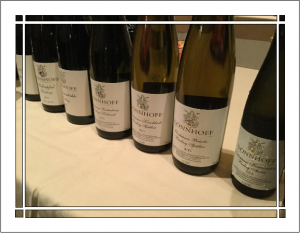 “Portland was host to a smattering of winemakers represented in the Terry Theise portfolio this week, none the least of whom was Anne Donnhoff sharing her entrancing range of 2015s. To say I tasted the wines quite young would be a bit of an understatement (many other winemakers were pouring barrel samples!) but there’s plenty to gleam from the youthful expressions Riesling in all its Pradikat guises.

“I could, and have, waxed poetic about this ethereal wine – the vineyard home of Donnhoff’s elusive eiswein. The vineyard is a monopole composed of grey slate on clay soil. This year’s Theise release grants us a Spatlese, Auslese Goldkapsel and, rumor has it, an Eiswein (stay tuned for that!).

“At the tasting, the Brucke Spatlese was poured after the Felsenberg Spatlese, which was fitting as it showed a touch sweeter on the palate with gentler acidity. The palate was creamier than the Felsenberg with a touch of the apple-skin-like texture I found in the wine’s 2013 release.

“It was the aroma in the glass that, like an old friend, brought a smile. Words escaped me for a few blessed moments while I sniffed. I was taken back to a few months ago when my little Meyer lemon tree blossomed. The scent from that day that filled my living room what not quite something to fit into words: certainly there were notes of citrus, a touch of Meyer lemon zest, and that haunting citrus-flower quality that evokes Proust’s remembrances of madeleines and lime flower tea. And here we find it, the word that best describes the Brucke wines: evocative.” -Suzanne