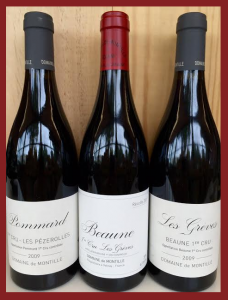 The Côte de Beaune hardly hosts a better-known name than de Montille. It’s as if the family of archetypical Burgundian vignerons arose from the earth of Volnay centuries ago. The late Hubert de Montille helped make the domaine famous for its classic style of age-worthy Burgundy, but now his son and daughter make the wines. Low yields and partial whole-cluster fermentation remain the norm, but the modern de Montille reds have softer tannins, are more aromatic, and they don’t require as much cellar time as before. Few other wines from Beaune, Pommard, and Volnay speak of their terroir and of Burgundian culture like de Montille wines do. The 2007 Greves will drink nicely now, while the 2009’s could be decanted today or kept in cellar another handful of years. This is very fine, hard to find, Burgundy. – Daniel

Stephen Tanzer–Vinous 90+ points “Medium red. Spicy redcurrant, raspberry, minerals and subtle earth tones on the inviting nose. Then rather reticent and firmly built, with good energy and lift to frame the red berry and spice flavors. Precise, juicy wine with very good aging potential. This is a modest 12.5% alcohol with a rather low 3.4 pH, according to Etienne de Montille.”

Stephen Tanzer–Vinous 90+ points “The 2009 Beaune Les Grèves is a weighty, powerful wine graced with a solid core of fruit. Hints of smoke, tar and ash add complexity to the dark fruit. This has more than enough energy and sheer heft to develop nicely for at least a few years in bottle. Crushed rocks frame the intense finish.”

Antonio Galloni 93 points “The 2009 Pommard Les Pezerolles is rich, round and seductive. Layers of fruit caress the palate in this enveloping, textured Burgundy. There is plenty of intensity in the glass. Hints of hard candy and licorice wrap around the finish. The Pezerolles was made with 100% destemmed fruit. Although I like the wine’s frank immediacy, I also think it will age gracefully.”