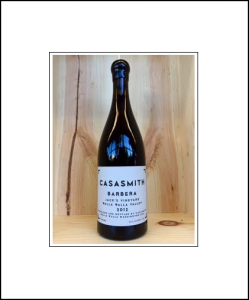 Delicious as Washington’s Cab, Syrah, and Merlot can be, let’s face it: we can only drink so much French varietal wine! Which is why CasaSmith proposes a trio of grapes from Italy instead, refreshing as a breeze on the Amalfi coast. Their 2014 Cervo Barbera represents Piedmont, with no new oak, grown sustainably on the Wahluke Slope, and it makes you wonder why the Evergreen State doesn’t cultivate more grapes from Italia. Barbera’s earthy, spiced, red fruit nature comes through a cappella in the Cervo. Serve it with Italian fare, or Washington-style with a proper venison steak, or, que cazzo, spaghetti and venison meatballs! The point is that borders don’t exist with wine, as CasaSmith winemaker Charles Smith well knows. – Daniel