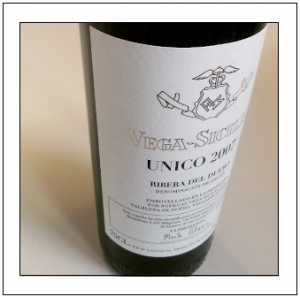 If Spain had an aristocracy of wines, Vega Sicilia would be king. (Pingus you could call a usurper to that throne.) Founded in 1864, over a century before creation of the Ribera del Duero DOC, the estate’s various owners have made singular wine ever since. In fact, Vega Sicilia can hardly be compared to other Spanish wines, not even the greats of La Rioja. For one thing, the grape varieties originally planted and still grown in Vega Sicilia’s 500-acre limestone-soil vineyard include Cabernet Sauvignon, Merlot, and Malbec, though eighty percent of the vines are Tempranillo. As a result, Vega Sicilia doesn’t taste like other Tempranillo-based wines from Spain. It is dense and sumptuous, intense but full of finesse, complex and long-lingering on the palate, with the individuality of a monarch. This is like Spain’s First Growth, its Dominus.

Vega Sicilia bottles its Unico only in quality years. After very low yields on old vines, the wine spends time in wooden vats and oak barrels of different sizes before resting in bottle. Release of a vintage usually takes ten years or more, and the wine can develop for many decades in the cellar.

The cool 2007 vintage produced lively wines on the lighter side of the scale. Classic notes of cherry and plum, fresh flowers, leather, and tobacco combine with velvety tannins and firm acidity in a fragrant, bold wine that will impress now or in ten years. Long live the uncrowned sovereign of Spanish wine! – Daniel

Wine Advocate 95 points “They have kept 2005 and 2006 for now, and they are releasing the 2007 Único from a lighter vintage that is accessible already; they will even sell 2008 before 2005 and 2006. 2007 was a cold vintage in Ribera and it produced lighter, fresher wines (perhaps not as problematic as 2008, but there was also frost in 2007). The wine might be a tad lighter than other vintages, but it’s more structured than 2008; it combines elegance and power, is nicely balanced and should be able to develop in bottle for many years, although the quick evolution of the bottle once opened made me hesitate about its drinking window. Let’s hope I’m wrong. 80,000 bottles produced.” WA