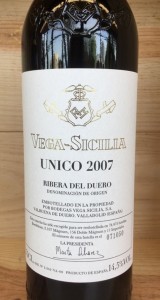 Wine Advocate 95 points “They have kept 2005 and 2006 for now, and they are releasing the 2007 Único from a lighter vintage that is accessible already; they will even sell 2008 before 2005 and 2006. 2007 was a cold vintage in Ribera and it produced lighter, fresher wines (perhaps not as problematic as 2008, but there was also frost in 2007). The wine might be a tad lighter than other vintages, but it’s more structured than 2008; it combines elegance and power, is nicely balanced and should be able to develop in bottle for many years, although the quick evolution of the bottle once opened made me hesitate about its drinking window. Let’s hope I’m wrong. 80,000 bottles produced.” WA