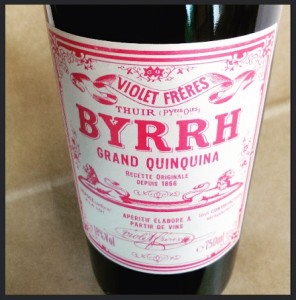 “The Byrrh is a rarity in many ways.  It is a quinquina (which uses chinchona bark for the bittering agent) that is red-wine based, whereas many red aperitifs are colored with caramel.  Despite wide popularity before Prohibition, it is not typically imported into the US anymore, so we are excited to present it.  It was originally created in 1866 in the Roussillon from Carignan and Grenache grapes.  It shows rich notes of dried plums and cinnamon and has a full body and lush sweetness.” -Suzanne

Importer note: “Byrrh Grand Quinquina is made to the original late 19th century recipe that earned fame both in France and overseas. Its long legacy is also documented by a half century of magnificent poster art.… Read the rest