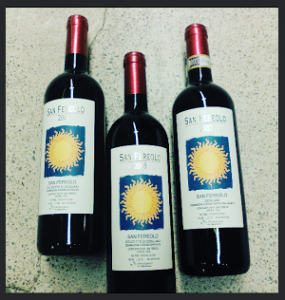 How often can you witness the stages of a wine’s development in this manner? The ’01 was such a treat a few weeks ago, and the others sing in such nice harmony with it. This stuff is Dolcetto like you’ve never seen it. Piedmont which you’d never expected. Try them – I dare you! We don’t have much left, so I wanted to make sure it got into the right hands. – Tyler

Importer note: “The most important wine of the estate. The Dolcetto for the top wine is sourced from parcels found in prime positions as well as the oldest vines of the estate.  The seven-year wait from harvest to release reflects the important of the San Fereolo to Nicoletta, who carefully tends the wine through its three years in large barrel before a 3-4 year hibernation in the bottle cellar.  Our tasting of each vintage from 2001 to 2008 revealed a consistent vein of dense, warm fruit, which spoke of the Langhe source.  Fresh mineral notes, mint, licorice and savory elements permeated each expression, while a lively freshness was alive in every wine, including the 14-year old 2001 vintage.  As with the Austri, the 2007 is the current release, and we are pleased to be able to source multiple back vintages.”