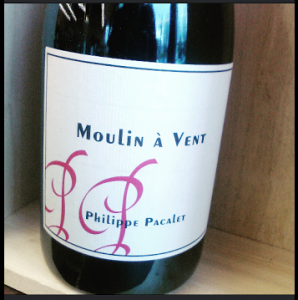 Never patient when it comes to Beaujolais, I drank Pacalet’s intrepid Moulin-a-Vent the very night it arrived at our shop. A simple salmon dish served as accompaniment, and I poured some out into a decanter in order to contrast normal and accelerated evolution of the wine as it aerated. Cherry aromas soared out of the glass, with an immediate flavor profile of goji berries, plum, Bing cherries, and a touch of leather. The fruit bears this intriguing crunchiness, with the acid mingling but never overarching beyond the wine’s overall feel. There is a playful energy this Beaujolais, which went lovely with the salmon and danced between being a little showy and a bit mellow over the course of four hours. I had fun drinking it, trying not to take it or myself too serious in the process. This cuvee, Pacalet’s first effort within Moulin-a-Vent, will evolve quite nicely; I’m eager to revisit in a few months’ time. As goes with many of my recommendations, though, don’t feel bad if you drink sooner rather than later. – Tyler