Charles Smith’s K Vintners and Substance wines need very little introduction, as they are some of our most popular year in and out.  The new releases just arrived and they’re highly praised and highly allocated, as usual. Fortunately, you can shop the complete selection on our web store now.

If you’re unfamiliar with the winery, know that Charles Smith fashions himself a bit of a rock star and he ought to—he used to manage them.  Then, one day, on a motorcycle trip, he rode through Walla Walla and was struck by the majesty of the terrain and the vineyards.  Within a few years, he had returned to open a winery.

His first vintage was 1999 and he produced a mere 300 cases of Syrah under his label ‘K Vintners.’ The winery has grown by leaps and bounds since—by our count, K makes well more than 15 wines, most of them single vineyard Syrah, and that doesn’t count the additional projects he’s involved in such as Substance and Sixto.

At this point, Charles Smith is one of the defining wine makers for what might be the modern Washington style.  His wines are big, rich, and ripe but polished. They show distinct differences between the vineyards and always have a hint of that savory, bacony quality that Syrah can bring to the table like nothing else.  The only thing we can complain about is that they sell out and we can’t carry them more often. 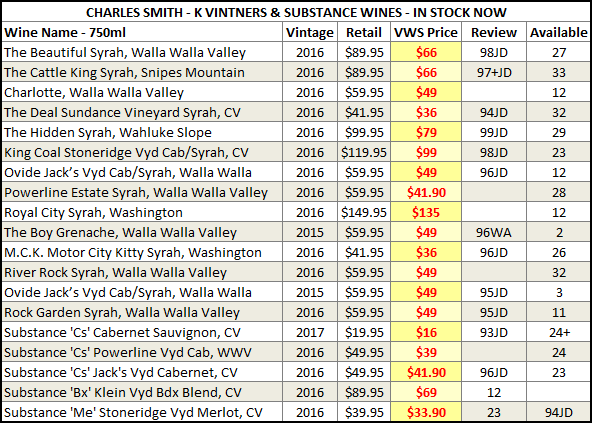