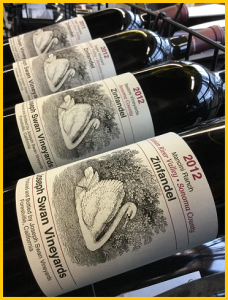 Joseph Swan Vineyards remains one of the most notable names in California wines.  Joe Swan was a trailblazer and legendary figure in the California’s viticultural history, and his son-in-law Rod Berglund is a talented winemaker of equal skill.  That said it sometimes seems like this winery doesn’t get mentioned as often as it should when we talk about California’s great wineries, which is a shame.

The Swan wines aren’t trendy and never have been—they epitomize the idea of classicism and have been made in the same style no matter whether the winds of fashion favored the huge and ripe or the light and lean.  The one constant for Swan has been the idea that the vineyard speaks for itself. Over the course of many decades, they’ve collected an incredible set of vineyards to work from, especially in Zinfandel, where Rod Berglund does some of his best work.

The Joseph Swan Zinfandels are many things, but easy to pin down and describe they aren’t.  Depending on the growing conditions and the vineyard, they can be lighter, spicier wines or bigger, powerful and fruit driven.  They’re never marked by new oak, though, so they always seem to be flexible and comfortable at the table.

In Stock Now from Joseph Swan:

Joseph Swan Vineyards Bastoni Vineyards Zinfandel, Sonoma County 2012 750ML ($34.95) Buy Now: $29 special
Winery note “Located in what I refer to as the Riebli Valley, just a few miles east of Hwy 101, this sight has been farmed by the Bastoni family since 1906. Martha Bastoni and her husband, Russ Messanna currently farm it. Although the old vines are gone, the replants are going strong and are meticulously cared for: Deep ruby color. Although we have only been making wine from this vineyard for three years, it exhibits what I have come to view as a classic Bastoni nose of deep blue tinged fruit, like a cross between boysenberries and blueberries. There is also a slight hint of cooking spice, perhaps cardamom, and much less pepper than we see in the lower Russian River Valley zins. Good but not overwhelming tannin and acidity and medium to full body.”

Joseph Swan Vineyards Ziegler Vineyard Zinfandel, Russian River Valley 2011 750ML ($31.95) Buy Now: $28 special
Winery note “Tasting notes:  Medium deep garnet color. Aromas of dark berry compote with hints of fig, baking spices and black pepper. In the mouth the aromas are echoed but with a bit more brightness due to its excellent acidity. Still fairly tannic. Decanting and/ or opening a couple of hours ahead of drinking is highly recommended for this young pup!”

Joseph Swan Vineyards Ziegler Vineyard Zinfandel, Russian River Valley 2012 750ML ($34.95) Buy Now: $29 special
Winery note “Boysenberry and the usual black pepper aromas are there but there is also cardamom, a bit of allspice and dried rose petal. It is super complex. At only 13% alcohol, almost as low as Mancini, it is not lacking at all for body. Our favorite Zeigler in a long while.”