Yes, Biondi Santi created the genesis of modern Brunello: the combination of bottling 100% Sangiovese wine from Montalcino, propagating the Sangiovese Grosso clone, and finally (in 1966) helping draft the regulations for the Brunello DOC. The foundational work did not stop there however, with Biondi Santi undertaking some of the first Massale or heritage selections on their estate to identify the best clones for winemaking. These results paid off in spades, with Biondi Santi’s genetic material being some of the most sought after clones of Sangiovese in the world. We’re excited to offer several exciting selections in stock now, including a new vertical pack of the riserva and an extremely rare winery cellared release.

Biondi Santi makes Brunello that all other estates are judged against.  Their estate, Il Greppo, occupies some of the most hallowed ground in the Brunello appellation, in the heart of Montalcino.  Their standards are high (they rarely release riservas) and their style defines classic. The wines are powerful, but not overwrought, elegant but emphatic. With the oldest vines on their estate now approaching 90 years old, there’s a level of depth and power in Biondi Santi that’s unprecedented anywhere else in Montalcino.

In Stock Now from Biondi Santi: 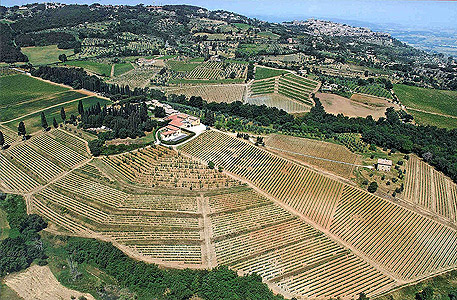 Biondi Santi Tenuta Greppo Annata Brunello di Montalcino DOCG 2012 750ML ($199.95) $169 special, 29 bottles in stock now
Kerin O’Keefe- Wine Enthusiast 96 points “Underbrush, ripe berry, new leather and Mediterranean herb aromas slowly take shape in the glass. Showing youthful tension, the vibrant palate delivers red cherry, pomegranate, white pepper and pipe tobacco notes framed by bright acidity and taut, refined tannins. It already shows great balance and finesse but is still young and tight. Drink 2022-2035.”
James Suckling 95 points “Love the dried lemon rind, florals and red fruits. Medium to full body and a solid core of fruit and spices. Long and flavorful finish. Just a hint of sweet tobacco. Better in 2020.”
This is the lowest listed price on the West Coast today!
Biondi Santi Tenuta Greppo Riserva Brunello di Montalcino DOCG 2011 750ML ($579.95) $419 special, 15 bottles in stock now
Ian D’Agata-Vinous 94+ points “Dark red. Musky nuances give way to brighter red fruit, licorice and herbal aromas. Rich and dense, with flavors of red cherry and minerals lifted by hints of orange peel and bergamot, not to mention noteworthy but harmonious acidity. Finishes long with youthfully chewy tannins and lingering hints of violet. This strikes me as a slightly readier to drink version of Brunello Riserva from Biondi-Santi, but as always, it improves greatly with aeration so decant at least six hours ahead for maximum enjoyment.”
Wine & Spirits 94 points “A warm summer yielded this rich and opulent 2011 Riserva. Only fruit from the estate’s oldest vines (some up to 80 years of age) makes it into this bottling, and that old-vine concentration shows in the wine’s dense flavors: notes of black cherry and umeboshi plum layered with iodine, basil and smoke. The tightly packed flavors need time to unfold, so it’s best to decant this several hours before serving.”

Biondi Santi Tenuta Greppo Riserva Brunello di Montalcino DOCG 1983 750ML ($1,499.95) $1,199 special, only 2 bottles available
***Winery Cellared Release***
Monica Larner-Wine Advocate 96 points “[Reviewed July 2021] This precious bottle is part of Biondi-Santi’s late-release program for collectors (I tasted bottle number 10,723). The 1983 Brunello di Montalcino Riserva is showing beautifully on its aging timeline, although this bottle is slightly more evolved since I last tasted this vintage in 2019 before the pandemic. With slow and measured determination, the bouquet embraces dried fig, cured bresaola, burnt caramel, wet campfire, dried oregano and a familiar aroma that reminds me of the Florence leather market. However, there is a lot of life and vertical lift in this Riserva, thanks in great part to the beautiful freshness that keeps the tannins alive and adds a pop of pretty acidity to the close. The wine shows its age with pride and grace, and the final results are quite spectacular. In fact, I’m opening the drinking window up by an additional five years thanks to the latitude and depth shown here.”

Mixed Case-3: Biondi Santi Tenuta Greppo Riserva, Brunello di Montalcino DOCG Vertical MV 750ML ($2,299.95) $1,899 special, only 1 mixed case available!
Mixed case: 1x 2008, 1x 2012, 1x 2013. No substitutions.
Review for 2008 vintage: Monica Larner-Wine Advocate 94 points “The delightful 2008 Brunello di Montalcino Riserva is expressive and feminine with crushed chamomile, forest fruit, bramble, tar and licorice. It renders a stirring, melodic performance that plays out slowly but with determination. Drink: 2017-2030.”
Review for 2012 vintage: Monica Larner-Wine Advocate 97 points “You will notice the dedication printed below the label of the wine label. It reads: “Dedicato a Franco Biondi Santi.” Indeed, the Biondi-Santi 2012 Brunello di Montalcino Riserva is the last vintage made by the towering father figure of Brunello whom most everyone referred to as the “gentleman of Montalcino.” Il Dottore, as he was also respectfully addressed, died at age 91 in April 2013, and he was very active in the winery as this magnificent wine took shape. This Riserva is a true work of beauty. It is released one year later than usual. The wine reflects the natural heft and power of the 2012 vintage, and it also shows that distinctive open-knit and accessible personality that characterizes this warm and sunny growing season. Il Dottore’s magic touch is revealed in the level of fine detail and precision that transcends vintage, grape and territory. That extreme focus is an achievement of this estate alone located in the celebrated Il Greppo property. This Brunello pours from the bottle with a magnificent garnet color, and it evolves in the glass with dark fruit, candied orange peel, spice, licorice, anise seed, cola and balsam herb. The aromas are magical and ethereal, albeit slightly ripe and soft as expected of this vintage.”
Review for 2013 vintage: Monica Larner-Wine Advocate 98 points “The Biondi-Santi 2013 Brunello di Montalcino Riserva is a stunning wine from all points of view. Seamless integration and elegant complexity are what stand out, and it’s worth dedicating a few extra lines to the aromatic depth that is put so beautifully on display as the wine slowly unfolds. The bouquet starts off with wild cherry, earth, wet ash, crème de cassis and pruny chocolate. With extra time, there are hints of dried tobacco leaf, sandalwood and mossy forest floor. These lead to a fine tail of dried herb, bay leaf and a touch of rusty nail. The Riserva comes in numbered bottles, and I opened number 04277. To the palate, the wine is streamlined and silky with smooth tannins and a well-managed 13.5% alcohol content. The oak presence is reduced to a minimum, offering mild hints of spice and the delicate sandalwood or dried fig aroma I described above. Fresh acidity is the glue that gives the wine buoyancy and staying power. At this young stage, this 2013 vintage could be considered a bit shy or slow to start, but this will play out to great advantage in the long term as the wine continues its bottle evolution.”

Shop our illustrious collection of Brunellos, including superstars of the region such as Stella di Campalto, Il Poggione, & La Gerla, on our web store now!