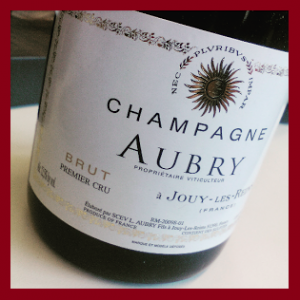 The Aubry line of winegrowers dates back to the late 18th century, to when France still had a king. As a nod of respect to their forefathers, though probably not to the royals, the modern-day Aubry brothers, Pierre and Philippe, set out to revive a few ancient Champagne grapes. In 1989, they took cuttings from a few remaining vines, and planted some Arbanne, Petit Meslier, Fromenteau, and Enfumé. Vive la tradition!

These rare varieties compose only 5% of Aubry’s Brut Premier Cru Champagne, but it’s the thought that counts. The rest of the blend includes 45% Pinot Meunier, 25% Pinot Noir, and 25% Chardonnay. Such a dominance of red grapes gives this Champagne a bold mouth feel, with plenty of backbone. At play with this are notes of white flowers, lemon, a stony minerality, and some toastiness on the finish. Balanced, fresh, and très Champagne… What’s not to like about a revisit to the Ancien Régime?! – Daniel

Josh Raynolds – Vinous 91 points “(45% pinot meunier, 25% pinot noir and 25% chardonnay, with the rest arbanne, petit meslier and fromenteau; disgorged in April, 2013): Bright straw. Pungent aromas of Meyer lemon, pear and fig, with a gingery accent adding lift. Sappy, penetrating citrus fruit and floral flavors are given a refreshingly bitter character by notes of pear skin and peach pit, with a waxy note coming up on the back half. A smoky nuance lingers on the finish, which shows very good clarity and length. Fifty-five percent of this blend is from 2010 and the rest is reserve wines, mostly from a solera that was begun in 1998.” JR