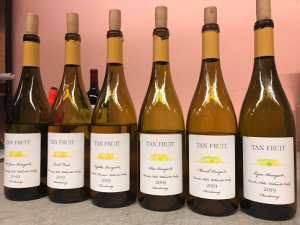 You know the Maresh family for their stunning examples of old-vine Pinot Noir and Chardonnay. In the spirit of experimentation Jim decided to launch a separate label, named Tan Fruit, in order to craft Oregon Chardonnay completely untethered. After blowing us away during a visit to the shop and sweeping Wine Advocate’s 2021 Oregon Chardonnay awards, there’s something special going on! Jim noted that his goal was “to explore outside of the Dundee Hills.” In future vintages, he will continue to explore, sourcing from a mixture of vineyards, new sources, and even new regions within Oregon.

He began Tan Fruit to “experiment and play around with techniques” for crafting Chardonnay, but the essentials for making Oregon Chard great in the winery will always be in his mind to pick early, age in a combination of steel and oak, and to ferment bone dry.
… Read the rest

Cordero di Montezemolo was founded in 1340.  We’ll let that sink in for a second. That’s a long time, by any measure, and when you have one family, in the same place, farming the same land, generation after generation, they are bound to become really good at it.  That’s very true here.  The Montezemolo wines have always been really wonderful, classic examples of Piedmontese wines in their respective categories.  With reviews off the charts for the 2017, now’s the time to stock up, especially since our pricing beats the competition out of the park!

Though Cantina del Pino has only been producing since 1997, the Vacca family and their estate vineyard have been a part of Italian winemaking for over 100 years. Domizio Cavazzo established the vineyard in 1894, becoming one of the first winemakers to produce Nebbiolo under the name Barbaresco. Keep in mind this was 72 years before the creation of the official appellation in 1966. An advocate for Langhe farmers, Cavazzo’s vineyard was well known, recognizable by the large Mediterranean pine tree he planted on the day his first son was born. In 1912, the Vacca family took over the estate and have worked the land for four generations, becoming known for world class wines from the historic vineyard.
… Read the rest

Weingut Wwe. Dr. H. Thanisch Erben Thanisch is a classic German Riesling producer. Without being hyperbolic they have garnered as many awards as their name has syllables. Named after the widow (wwe being the German abbreviation) who inherited the estate in the 19th century, Thanisch has been producing wine since 1636. As one of Germany’s most exceptional producers, Thanisch was one of the first estates invited to join the VDP Consortium in 1910, has continued to pursue excellence ever since.

Thanisch holds the crown for highest price ever fetched at auction for a German producer thanks to working entirely with old vines and some of the most lauded vineyards in the Mosel. The wine in question? A bottle of 1921 Berncastler Doctor Riesling Trockenbeerenauslese that had been secretly hidden in their underground cellar for decades.… Read the rest

Yes, Biondi Santi created the genesis of modern Brunello: the combination of bottling 100% Sangiovese wine from Montalcino, propagating the Sangiovese Grosso clone, and finally (in 1966) helping draft the regulations for the Brunello DOC. The foundational work did not stop there however, with Biondi Santi undertaking some of the first Massale or heritage selections on their estate to identify the best clones for winemaking. These results paid off in spades, with Biondi Santi’s genetic material being some of the most sought after clones of Sangiovese in the world. We’re excited to offer several exciting selections in stock now, including a new vertical pack of the riserva and an extremely rare winery cellared release.
… Read the rest